Rain and Retribution By L.L.Diamond 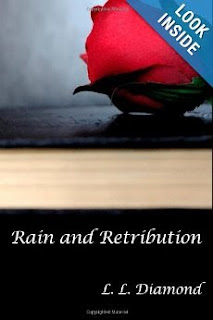 Rain and Retribution by L.L.Diamond

“A woman of the ton would not have cared if I had cheated Wickham of a living. She would not challenge or question my thoughts. Instead, she would simper and fawn to attract my notice, or possibly attempt to trap me in a compromising position.” - What an observation! - L.L. Diamond

This is a real refreshing change from the P&P 'what ifs' I have been reading recently. As with the usual 'what ifs' you can guess roughly where it is going and how it is going to turn out. However not with this book! Most variations change the basics, what if they meet in London before Pemberley or what if Mr Bennett died? This books changes the what ifs that could have occurred before the original P&P begins.

We do not see much of the Bennett family, but as a result we get more Darcy and Elizabeth, yay!! Usually with variations I need for things to turn out as expected regardless of how they get there. Enjoying the angst of will they won't they and misunderstandings galore. This book defies that and is the opposite to what I am accustom too, yet surprisingly I was not upset due to the fact the characters are skillfully built on a different 'what if ' foundation.
What I loved about this book was it's realism, Elizabeth was witty and impertinent, but not overly witty like so many variations which feel that she must say something that will amaze the whole room. The Colonel was a jovial character which was refreshing in comparison to other variations that make him really funny and suprise I actually liked Mr Hurst in this!
I loved the analysis that was done, incorporating the societal morals, values and customs of the era. Various concepts were explored which other P&P variations have not done in such detail, including why the late Mr Darcy seem to favor Wickham and why he was so jealous.
I loved this Darcy, a mans man who commands respect and oozes authority. He is very protective without being over bearing and loves Elizabeth most ardently.

“I do not believe you to be beneath me, Elizabeth. You have qualities I value which are worth more to me than money and connections.” -  I Love Diamond's Mr Darcy

Some of Austen's original words are twisted ( used in different situations or said by others) and there are some great ones but not loads compared to other variations that go over the top with them. Okay so briefly the negatives, the language was more contemporary than regency and some of it did not flow as well as it could; but this has to be excused in light of the fact this is a self published book. The making of this book has to be the in depth details that made it a pleasure to read. I look forward to another if the author cares to favor us. As always I cannot resist sharing another excerpt, so I will leave you with this.

“I could be wrong,” he said, trying not to smile. “But I would hope that I am a small improvement over Mr. Collins.” Whatever she had expected him to say next, it had definitely not been that. She began laughing," - L.L. Diamond