My sister in law and I, along with my two daughters went to watch Chapterhouse Theatre Company perform Pride and Prejudice at Chatsworth House. This is Chapterhouse's 14th year of touring open air theatre at some of the most beautiful houses, castles and heritage sites across the UK and Ireland. With performances such as Shakespeare's A Midsummer Night's Dream, Twelfth Night and Austen's Sense and Sensibility. 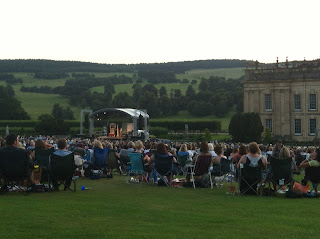 When we arrived we had to park in the overflow car park which was overflowing in every sense of the word! We stepped out of the car among sheep and had to tip toe through a minefield of sheep excrement! It was funny but not! Including the fact that we had both left our cameras and had to make do with our phones!
The performance started at 7.30pm and upon entering the garden we were in awe of the beautiful sight before us. The stage backed onto Chatsworth house with the scenic view of the hills in the background. The theatre was at the bottom of the hill, which meant the audience could view the performance from any angle without an unrestricted view. 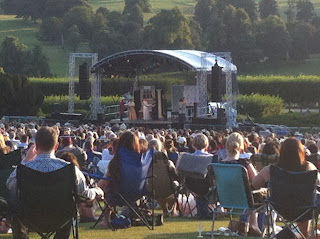 The performance was by no means capital but it was still enjoyable and I would not have missed it for the world, hey it's Pride and Prejudice! The actor who played Darcy seemed to be copying David Rintoul (1980), but it was over the top in a theatrical kind of way. Elizabeth imitated and sounded like Jennifer Ehle (1995), which isn't a bad thing. Mr Bennet imitated Moray Watson (1980) and played the part very well. Mrs Bennet was hilarious, with the high toned voice of Priscilla Morgan (1980) and all the exaggeration of Alison Steadman (1995). Mr Collins had us all in stitches with his exaggerated low bow, with one leg extended out front. Besides the fact that the performances were lacking in what I imagine Austen's characterisations to be like, it did not detract from the overall enjoyment of the evening.

With hundreds of people in attendance, everyone stayed silent throughout the performance ( bar a champagne cork that flew 4 foot in the air and showered the people beneath to everyone's amusement). It was great to see so many people showing respect for the actors that were there to entertain us all. Respect and commendation must be given to them for the hard work and dedication required to remember their lines without mistakes. 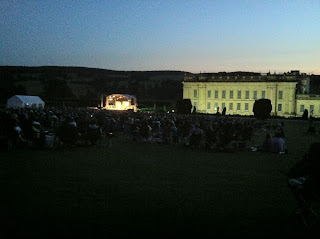 After the interval the sun started to set and Chatsworth house was lit. It was a spectacular sight to behold, the hills, the greenery and  the stage.  Hundreds of people gathered in one place with a common interest, laughing in unison at the witty humour of Austen! The performance ended at around 11pm and everyone left in high spirits. We were then faced with the daunting task of navigating through the minefield of sheep s**t in the dark! It was truly a magical evening and one that  I will cherish. My sister and I could not help but wonder what Jane would have thought, but we are sure she would have been happy with the Legacy that is Austen!

I will leave you with another clip, if you turn up the volume you will hear part of the proposal, but please excuse the quality (no camera! argh) and also my daughter speaking towards the end!!!( Originally I had not planned to take her as she is only three and the performance was late, but as we got in the car and saw her little face, we could not leave without her!)