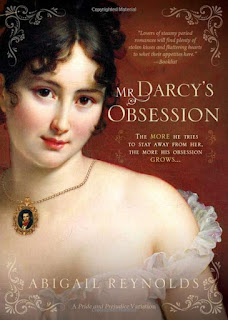 "Mr. Darcy is determined to find a more suitable bride. But then he learns that Elizabeth is living in London in reduced circumstances, after her father's death robs her of her family home...

What if...Mr. Darcy can't Help himself from see king her out...
He just wants to make sure she's alright. But once he's seen her, he feels compelled to talk to her, and from there he's unable to fight the overwhelming desire to be near her, or the ever-growing mutual attraction that is between them..." - A.Reynolds

This book is a Pride and Prejudice variation, if your someone who doesn't like Jane Austen's work meddled with then this book probably isn't for you; but if like me you love anything Darcy and Elizabeth (within reason) then it is an an enjoyable variation.  Jane Austen's fictional characters meet with a twist of reality which is refreshing. We really get to look at the seedy side to an era where offspring were regarded as pawns as a means of forming family alliances and fortunes. In one of the chapters  Darcy's uncle and cousins are talking about finding a husband for Georgiana; Darcy doesn't like any of the suggestions and we see how lucky she is to have the brother that Austen created.

"So a fop, a sot, or a fool was acceptable, but not French blood. Darcy was glad he had refused the port. Otherwise he might have been tempted to fling it in his uncle’s face." - A.Reynolds

It was great to see the impropriety of high society and Darcy's realization that Mrs Bennett is not singular in that quarter.  The importance of propriety and family honour is reiterated throughout the book which I always find it interesting.

In Austen's Pride and Prejudice we see that money and power is key in relation to freewill in Elizabeth's conversation with Colonel Fitzwilliam,

“And if not able to please himself in the arrangement, he has at least pleasure in the great power of choice. I do not know anybody who seems more to enjoy the power of doing what he likes than Mr. Darcy.” “He likes to have his own way very well,” - Jane Austen

In Mr Darcy's Obsession although Power is freedom, we see in Darcy's case it is tied to a sense of propriety and the following realization I thought was great,

"He had been raised to honour family and duty above all else, but he was no longer a child, and his uncle was not someone he could respect in anything except for his birth. What was the value of keeping such a tie?"
"The realization hit him with startling clarity. He did not need Lord Derby, Lady Catherine, or the ton. He had Pemberley, Georgiana, and Elizabeth, and that was all he needed. He was the most fortunate of men. Why look beyond them for a recognition that, in the end, meant nothing?" - A.Reynolds

The new characters introduced in the book were great, my favorites were a young street urchin named Charlie ' Mr Darcy's spy'  and aunt Augusta a woman with money of her own, who can do as she pleases. Augusta represents the power that is afforded to a women if you have money in a male dominated society. Elizabeth's wit was well done and there were many humorous moments throughout the book.  In this excerpt Mr Darcy's servant Simms sends his uncle Lord Matlock on a wild goose chase ,

"Augusta laughed heartily. “Brighton, Simms?” Simms bowed. “The boy might have said Meryton, but my hearing is not what it once was. It sounded like Brighton.” - A.Reynolds

Darcy's expressions of love were endearing and as usual I loved the fact that the author did not make Darcy a love sick fool. Overall the book is a little far fetched for Austen but plausible, hey it's fiction after all. If you love Austen fan fiction, then this is an enjoyable read. I will leave you with this last excerpt

"Aunt Augusta laughed and nodded at Elizabeth. “You see, my dear, what a fine influence you have. One might almost think he has a sense of humour.” “Only a man with an excellent sense of humour would choose to marry me,” Elizabeth said with a knowing smile." - A.Reynolds


Feel free to voice your opinion, it is most welcome!
Posted by Unknown at 02:14