These Three Remain By Pamela Aiden 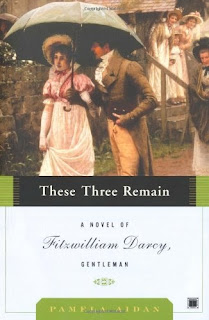 The last in Pamela's trilogy, from Rosings to the wedding this book is wonderful, I had 400 highlights on my Kindle!

"Hate Elizabeth? How could he? How could he hate the woman he loved for demanding of him the man he had always desired to be?" - P.Aiden

Don't know where to start! We get to see how Darcy found out Elizabeth was at Rosings, how he felt and that he could see Richard was enchanted by her.What was really interesting was Darcy's thoughts on why he thought Elizabeth did not come to Rosings, the night she plead a headache. The book is humourous as were the others in the trilogy so I have to include this excerpt of their arrival at Hunsford's Church at Easter .

Once the door was opened, he bounded out of the equipage, forgetting his duty to his aunt for the length of two strides before Darcy caught his arm. “Richard!” he hissed to him. Fitzwilliam stopped short, a question on his lips that Darcy answered with a silent cock of his head. “Oh, good Lord!” Fitzwilliam whispered fearfully and, pasting a smile on his face, stepped back to the carriage and offered his waiting aunt his hand down. “I shall write to your mother, Fitzwilliam,” Lady Catherine announced as she took his hand and descended from the barouche, her eye sharply inspecting his now blanching countenance, “and inform her of your unusual behavior. Further, I will advise that she read it to His Lordship.”- So lady Catherine!!!

Darcy's transformation was executed brilliantly I could not find fault, it was a pleasure to watch it unfold. Although Darcy's drunk evening when he confesses his history with Elizabeth to his best friend lord Brougham, did not sit well with me it was however necessary to Darcy's transformation because he would never have confessed otherwise (sober) and as a result his friends assessment of Darcy's failed proposal is priceless. Fletcher, Darcy's valet is yet again invaluable in this last book; especially his mention of Shakespeare's 29th sonnet which works so well with the idea of Darcy having hope.

"and she, with no money or prospects of her own, had roundly refused him— refused him, even with so much at stake. The consequences Elizabeth had embraced rather than trust her future to his care loomed more solidly before him than had they heretofore. What kind of woman would do so?" - Indeed what woman would!! - P.Aiden

I thoroughly enjoyed Darcy's passion for fencing as it really added more depth to his character. Was not sure about Darcy confessions to Georgiana, but it is portrayed in the original P&P that they correspond with one another and he loves his sister dearly. The conversation Darcy has with Bingley indirectly telling him to have more confidence in himself is a subtle master piece and Richard sights Elizabeth in London! These little details amazed me, what happened when Dracy left Pemberly to set off to London and what happened when he found Wickham and Lydia.
The meeting Darcy had with Hinchecliffe the late Mr Darcy's secretary was an eye opener; I always pictured Darcy just having the money to bribe Wickham, not thinking of the little details that money can be tied up in assets, meaning money is not available at a drop of a hat. What the Colonel and Brougham say to Darcy on his wedding day before he marrys Elizabeth continued to make up the wonderful details I loved so much about this book.
This trilogy has been an epic journey that I have thoroughly enjoyed, I do not think you will find another book which tells P&P from Darcy's point of view any better than this one and the language throughout is magnificent !!! I will leave you with this last excerpt as Darcy arrives at Pemberley just before meeting Elizabeth.

"He looked down on Pemberley House, questioning every exquisite line until that something found a name. Gratitude. Gratitude for what he had been given filled his breast. And for the first time in his life, Darcy felt that he might possibly be worthy to hold the great gift that had been entrusted to him." - P.Aiden

THANK YOU PAMELA FOR A SPELL BINDING TRILOGY