An Assembly Such as This by Pamela Aidan

Thought I would share an old post of one of my favourite trilogies, before I officially started blogging.
This book is the first in a trilogy by Pamela Aidan, all three books  follow Mr Darcy through Pride and Prejudice from his pov. 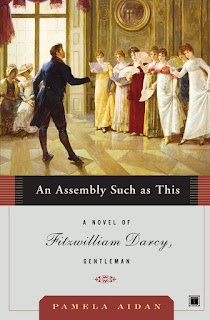 An Assembly Such as This is an exceptional read, finally we get to see why Jane cannot believe that Mr. Darcy could be so unworthy of Mr. Bingley’s regard. He is a great friend to Bingley and we get to see Mr Darcy's amiable side. The side to Darcy we do not get to see in Austen's P&P is difficult to judge, but as much as I think he is witty, he was a little too humourous in this (not that I am complaining), which did  not mesh with Austen's character. As attested by the Colonel himself that Darcy behaves differently in his own company I do not imagine the change is too different, maybe just a little less haughty perhaps! Anyway lets move on, seeing how Darcy may have interpreted his encounters with Elizabeth was executed wonderfully. This book incorporates conversations and scenes that are not in Austen's original book, such as when they would have met at other engagements which I loved. Elizabeth's witty personality was captured convincingly, hats off to you Pamela! Without giving anything away the brightly coloured threads that Darcy finds in the library are an added bonus and play a significant role throughout the trilogy. As always I have included some of my favourite lines in the book, unfortunately I have too many, which is a sure sign of a good read.

'Watching her intently, he hoped to discern a trace of that ironic expression which, even now, he was beginning to discount as his own imagination.' - The first time he sees Elizabeth after the Meryton ball ( not in Austen's original).

'Unusual in her manners, to be sure, he pronounced to his waiting sensibilities, but lacking the physical and social graces that bespeak a truly genteel upbringing. It is well for her the officers are enchanted, for that is all the further she may look. Darcy waited in vain for his emotions to second his verdict, but they were frustratingly unwilling to accede to his judgment'  - I thought this was a lovely way to show that regardless of what propriety demands his heart begs to differ.

There are some very funny scenes throughout and the language flowed as it should. So many of Darcy's thoughts are expressed and his observations of Elizabeth give a wonderful insight into just how he came to admire her. His correspondence with Georgiana was an added bonus and he even mentions meeting Elizabeth, this is interesting because it shows she is a singular woman indeed! Darcy's haughty and proud personality is expressed in his thoughts, including what he thinks of Miss Bingley's annoying attention which was most funny.

The Netherfield ball is my favourite chapter, what Darcy is thinking during the infamous dance is really well done. We also get the first glimpse of Darcy's relationship with his valet Fletcher which is used to great effect throughout all three books. When he retires that evening Darcy says “The man who knows his duty and, against all natural inclination, performs it. That man, Fletcher, will in the end know no regret.” - P.Aiden This definitely sums up Darcy's fight with propriety he is almost convincing himself he will be alright, It really pulled at my heartstrings.

'Was it nearer to the truth that separating Charles from Miss Jane Bennett was his surest defense against the confliction raised by his own heedless attraction to her sister?' P.Aiden - I too thought this to be partly the reason when I read the original P&P

'There were often times in the night that he wished for the comforts of marriage..... the folly of trading his happiness for his comfort. He knew that both were possible; he had seen it in the lives of his parents before his mother’s death and in the faraway smile that would sometimes steal across his father’s face after 'P.Aiden - I often did wonder why he was not already married, surely if duty was what mattered he could have been married already to someone with desirable connections. I like to think that as Pamela puts it, he didn't need fortune and he wanted to hold out for a marriage of happiness.

An in depth look from the beginning of P&P up until he goes back to London with Bingley. We meet one of Darcy's friend from Cambridge, his horse Nelson and his dog Trafalgar. Each are used wonderfully, so that we can understand Mr Darcy's personality more fully. The chapter titles are funny capturing Mr Darcy's comparisons to fencing in regards to his encounters with Elizabeth. "The Roquet" (hilarious!) showed the depth of Pamela's research . The Shakespearean references used between Darcy and his valet are very clever, as his valet cannot directly say what he thinks in regards to Mr Darcy's personal life. A great read that I would recommend to any JAFF devotee.

As always I delight in hearing your thoughts!
Posted by Unknown at 01:45