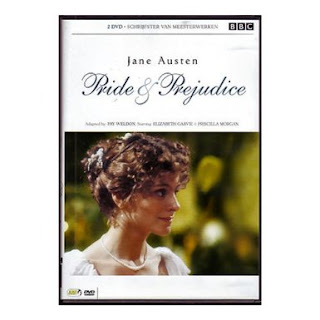 Okay so another addition to my original list for the challenge

The most striking thing about this version is the characters portrayal of Regency era ladies and gents, especially Lydia and the other sisters unlike in 1995 version where I kept thinking you’re supposed to be daughters of a gentlemen. In this version they behaved closer to the way Austen portrayed them. Loved the costumes (I know it’s silly but Elizabeth’s ringlets could have been better done they had no conviction sorry I used to be a hairdresser can’t help it). I  loved the letter scene, Mr Darcy's voice wow! The way he reads it alongside the visual of him walking away is brilliant. I will also agree that this Mr Collins is the best so far. Mr Wickham was also not as smug as the 1995 Wickham, all innocence and innuendos. Mrs Bennett's voice was going through me at first but I suppose it added to how annoying she can be.

Now unfortunately the negatives if you can call them that, I wish that others hadn't spoken lines which weren't there own. I loved the proposal but it would have been better if Darcy showed he was a little shocked when Elizabeth first said no, he didn't show any emotion until towards the end, when you could see her words had really effected him. Elizabeth is a little too composed, when she first sees Darcy at Pemberly, I would have liked to have seen more discomposure, she looked him dead in the eye whereas in the book she could scarcely meet his eye. I felt in general the vital scenes, Netherfield drawing room and ball, the proposal, Pemberly and the end were all too short. The drawing room scenes were squashed together, I suppose 5 hours was not enough for me! I felt that because Pemberly was cut short I didn't get the full essence of Darcy's amiable Character. At first I thought it was because I was comparing him to Firth who portrays a definite change. But no, it is little things like the fact he didn't ask to be introduced to the Gardiners, not seeing the scene at the inn as it should have been, Bingley coming , her speaking to Miss Darcy and the Gardiners witnessing Mr Darcy's regard for their niece. Finally her running from the inn to Pemberly spoils it for me, in the original he goes to her which is further proof he still loves her and is making the effort to seek her out. But this way made her look ridiculous running into his room and crying all over the sofa, I thought Elizabeth please now you do look wild!

Anyway apart from that I really enjoyed it and the bits where you could hear Elizabeth’s thoughts were great and were an added bonus. Mr Darcy’s portrait had a bigger impact on me than in 1995 version, I actual felt the words  "she thought of his regard with a deeper sentiment of gratitude than it had ever raised before; she remembered its warmth, and softened its impropriety of expression" as they were intended. Finally I did laugh throughout  if you can laugh Austen’s wit and humor has been portrayed well, Mrs Bennett trying to get the girls out of the room so Bingley and Jane could be alone was hilarious. My conclusion at the moment is that this will have to be my favorite now over the 1995 version as it is the closet adaptation. I do a agree another is over due!
Posted by Unknown at 08:12