'Side By Side, Apart' by Ann Galvia ~ Guest post & Giveaway! 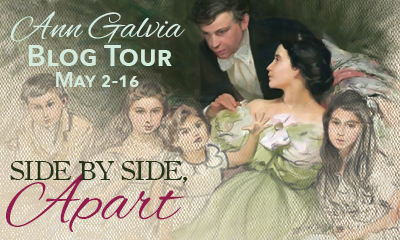 Hello fellow readers,
Today I am delighted to welcome  Ann Galvia Author of 'Side by Side, Apart'  for a Guest Post & Giveaway!

As part of the 'Side By Side, Apart' Blog Tour, kindly brought to you by Leatherbound reviews  and  Meryton Press.

Side by Side with Mansfield Park

Hi, everyone! Today, Tamara has let me take over her blog, where I am continuing my series about how Jane Austen’s other novels shaped my Pride and Prejudice story, Side by Side, Apart. It is my first book. Please allow me this little indulgence to talk and talk and talk about it.

No? Okay, let’s talk about how we all love Mr. Darcy! 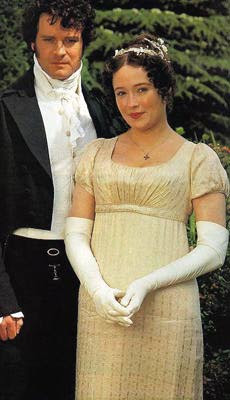 Especially Elizabeth. Except when it is except Elizabeth Bennet. She, um, she has some bad
judgement, sometimes? Certainly where Mr. Darcy is concerned! She has been known to be blind, partial, prejudiced and absurd.

So, when an author decides they want to...oh, I don’t know...lock Lizzy up at Pemberley inexplicably married to and pregnant by Mr. Darcy, for her peace of mind, if nothing else, there needs to be something big to immediately prove to her that Darcy is a good guy. A man she can trust with her well-being and the well-being of her child(ren.)

And that something big turned out to be a nine-year-old girl named Julia Wickham. Part Fanny Price, part Jane Bennet, Julia is the second child and oldest daughter of George and Lydia Wickham. She lives at Pemberley, where she is being raised by her aunt and uncle. The Darcys have sponsored her older brother, Edmund, in his career with the Navy. If these names and situations sound familiar, it’s because they come straight out of Mansfield Park. I knew from the beginning that children were going to be a central part of Side by Side, Apart. Jane Austen’s novels tend to focus on young women out in society, but by 1825, the Darcys have left the marriage mart behind and moved on to parenthood. More than her other novels, Mansfield Park gives us a complete picture of a family. It’s a dark novel, dealing with abuse, neglect and young adults who time and time again prove themselves to be selfish, short sighted and destructive. Side by Side, Apart is nothing like that. But when I began to consider a 19th century house full of children, Mansfield Park was my starting point. The passages that dealt with Sir Thomas’ behavior when the children were young were especially on my mind.

Growing up, it always bothered me that my mother treated my behavior like it was a reflection on her. I was an individual, making my own choices! As an adult, I can see where she had a point: how children are taught to be behave, how they are educated, what values are instilled in them--those things reflect the character of the parent. One of the ways--possibly even the primary way--Elizabeth comes to understand Darcy’s character in Side by Side, Apart is through his children. How do they behave? What has he taught them? Who are they, as individuals capable of making their own choices, and what do their personalities show her about their parents?

And what can Julia, the poor relation, the daughter of Darcy’s enemy, illustrate about him?

Darcy does not allow anyone to question Julia’s worth or her place in the family. She is an equal. She receives the same education as the other children. Her clothes and toys are just as good. Darcy hopes to see her make a great match when she’s grown up, but if she doesn’t choose to marry, that is fine, too. If she would rather change her name and be a Darcy of Pemberley instead of becoming the mistress of another home, it is already settled that she may do that. She is not Darcy and Elizabeth’s child by blood. She is their child in their hearts and that is all she needs to be.

When Elizabeth wakes up, scared and confused and desperately needing to know that she and her children are in the care of a man they can trust, Julia proves that they are. Through the values she has been taught, the behavior she demonstrates and the love and respect she is given, Julia illustrates Darcy’s worthy character. 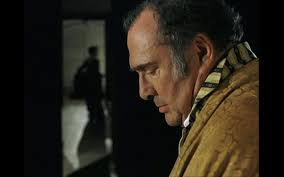 In short, he’s no Sir Thomas.

The Side by Side, Apart blog tour continues until May 16th with excerpts, reviews, an interview and more guest posts! And don’t forget those eight chances to win a copy of the book! I’ll be continuing this series on how all of Austen’s completed novels influenced my Pride and Prejudice story as the tour continues. I hope to see you there!

If the purpose of a Guest Post is to entice and capture the readers' attention, then this is a fine example! Thank you Ann, I look forward to reading this one! Good luck in the Giveaway everyone! 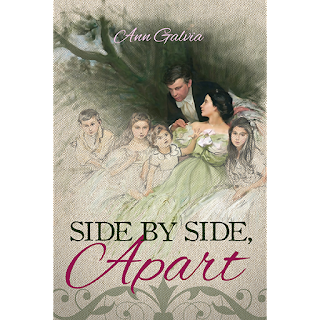 “You see what a strange circumstance it is,” she said, feeling some fleeting relief. “You know our acquaintance has not been easy.”
Elizabeth Bennet—stubborn, quick to judge but slow to revise her opinions, and entirely prejudiced against the man who had just proposed marriage at Hunsford—awakens to learn she has been in an accident. Bedridden in an unfamiliar house, she learns eleven years have passed since the last moment she can remember.
She finds herself a married woman, the mother of four, and pregnant yet again. Her children are strangers, and most mystifying of all, Fitzwilliam Darcy is her husband! How could she have married a man she loathes?


Confined to the house by her injury, Mr. Darcy’s company is inescapable. But is just being side by side enough to overcome their differences? What happens when Darcy, improved in manners and happily married to Mrs. Elizabeth Darcy, is faced with an obstinate, bewildered Miss Elizabeth Bennet?
Side by Side, Apart by Ann Galvia
Blog Tour Schedule