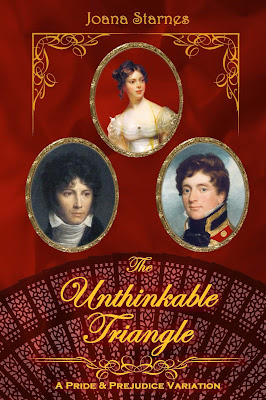 Thanks, Tamara, for welcoming me here today, it’s always such a pleasure to be your guest!
My visit is part of the blog tour for the launch of my latest novel, The Unthinkable Triangle, a story centred on the love triangle involving Elizabeth, Mr. Darcy and Colonel Fitzwilliam. One of my lovely beta-readers had a great deal to say about that particular scenario, not least because she could not possibly imagine Elizabeth in any arms other than Darcy’s. Do rest assured, gentle readers, Elizabeth does get there in the end, because of course it is in Darcy’s arms that she belongs, and my dear beta-reader eventually forgave me for the detour that Elizabeth had taken.

Her other objection, a very slight and passing one this time, was the introduction of a new generation of Pride and Prejudice characters – their sons and daughters. She said that she would much rather not imagine them as parents, but as young couples. Very young couples, and very much in love. Of course, the concepts are not mutually exclusive. But I agree, I would much rather write about the Darcys and the Bingleys in the bloom of their youth. Having said that, I do like to imagine them in the early stages of parenthood, and I would certainly enjoy exploring that avenue sometime.

When our first child was born, my husband said that there is never any point in comparing life before children with life as a young family. ‘It’s something completely different. Like emigrating to another country,’ which I thought was a lovely way to put it. Of course, the change would not be quite so drastic for Mr. Darcy and Mr. Bingley, who would have it in their power to employ a small army of nurses and nursery maids.

I think both gentlemen would become excellent fathers, in their very different ways. For now though, in The Unthinkable Triangle, this endearing journey had only just begun. The younger generation are but babes, and I would like to share with you an excerpt from the time when the first of them was born. Not to the Darcys, not for some time yet – but our favourite hero is scarcely less affected. 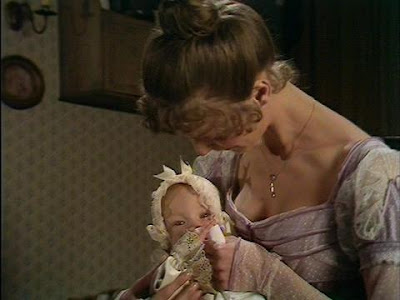 Maids trooped up and down the backstairs fetching hot water and fresh linen. The accoucheur arrived and was brought up. Soon after him, the midwife. Then footmen came laden with armloads sent from Gracechurch Street to set them in Jane’s sitting room, for Mrs. Gardiner to determine what was of instant use and what could be left and examined later.

The only one untouched by the commotion was Georgiana, who was still asleep in her bedchamber overlooking the gardens, at a comfortable distance from the guest rooms. As for Darcy, all that was left for him to do was to play the part reserved for gentlemen on such occasions: waiting in the downstairs parlour, although without the port or brandy commonly prescribed to the expectant father. That is, until some hours later, when a new role was assigned to him.

He had walked up, hoping to encounter one of the maids, who might have had some knowledge of Mrs. Bingley’s progress. Instead, he came across Elizabeth and Mrs. Gardiner. They had both come out of the birthing chamber and at first Darcy thought that something was amiss, until Mrs. Gardiner’s words removed every fear of that nature. It seemed that the difficulty the lady faced was not with Mrs. Bingley but her younger sister.

“No, Lizzy, I will not relent. You have done enough, and now you cannot help her. There is a limit to what an unmarried lady ought to see, and for your sake and Jane’s, ‘tis time for you to keep away. Oh. Mr. Darcy. How fortunate that you came up. Would you be so kind to escort my niece to the downstairs parlour? Or anywhere. Just away from here.”

Narrowed eyes and a very stubborn lip told them both that she would not go willingly. With a light frown, Mrs. Gardiner pressed her point.

“Do be sensible, dear girl. Pray do as I ask and let me go back in. I cannot stand here debating this with you. I should be with Jane.”

“No. She frets about you seeing her in pain – seeing everything. Just go downstairs with Mr. Darcy. I promise to send word,” she added swiftly, clasped her niece’s arm in tender reassurance, then hurried away and vanished behind the heavy door.

Even in the poor light of the flickering candles Darcy could see the look of pained confusion overspreading the most beloved countenance. In a few steps, he was beside her and scrupled not to take her hand.

“Can I not wait in the sitting room instead?” she pleaded.

“I think your aunt would rather you did not,” Darcy ventured an opinion and, with a deep sigh, it seemed she was about to listen.

But just then a long muffled cry was heard from behind the door, and Elizabeth tugged fiercely at the hand that was restraining hers.

He did not. None of them could tell how it came about, but a moment later she was in his arms, mindlessly struggling for release, despite his every effort to soothe her with disjointed words of comfort. At last she stilled and he most reluctantly withdrew, but took her hands in his.

“Come away. Come away with me,” he urged again. “Let us go to the parlour, as your aunt suggested, and play at chess or something…”

“Chess? ” she exclaimed in disbelief, and stared at him as though he had utterly lost his senses.

“A poor suggestion, I agree. But you must see my difficulty. If you were Bingley, I would ply you with a vast quantity of brandy, but Mrs. Gardiner might have a thing or two to say if I were to give you the same treatment.”

Almost despite herself, Elizabeth chuckled too and half-heartedly allowed herself to be led towards the staircase. They descended, her hand still clasped in his, and slowly made their way into the parlour. Darcy settled her on the small sofa by the fireplace, only to see her shiver and huddle forward, arms tightly wrapped around herself. It might have been due to anxiety or fatigue and not for cold, but he took no chances. He went to stir the fire in the grate, added more coal and poked and prodded it until new flames leapt up, casting an orange glow over their faces. He stood and turned to offer:

“Let me send up for your shawl.”

“No, leave them be. They must have enough to do already.”

“Then pray excuse me for a moment,” he mentioned in passing and, without waiting for her reply, he went to fetch a cloak from the small room they were kept in, just off the entrance hall.

He brought it to the parlour and quietly approached to drape it round her shoulders. She looked up in surprise, which melted into gratitude.

“I thought you might be. ‘Tis chilly in here. But it will warm up soon enough.”

He walked to the marble-topped table where a few decanters glittered in the firelight and cast a smile over his shoulder.

“I will not offer brandy, but can I get you something else?” he asked. “Sherry perhaps?”

Darcy wandered slowly back, having selected nothing either. Instead, he sat beside her and reached to cover the hands clasped together on her knee.

“Talk to me,” he entreated softly.

“Anything. Jane. Or your other sisters. Your father’s favourite books. Or better still, Mr. Collins’s poultry,” he added with a muted chuckle and she glanced up at that with a faint smile of her own.

“Or perhaps his bees,” she offered in her turn. “He keeps bees too, you know, but they do not much like him. Charlotte says they sting him now and then, but he is very sanguine about it. He has it on very good authority that a bee-sting once in a while is good for one’s health.”

She gave another quiet laugh.

“I would not know. But I think it very likely.”

She dropped her eyes to stare for a long moment at their fingers, tightly interlaced, and nothing was heard but the crackling of the fire, until at last she looked up again.

“I thank you,” she said softly.

“For being here when I need a helping hand. You always are.”

A long breath left Darcy’s chest, or it might have been a sigh. Fitzwilliam would not like this in the slightest, but it was a truth that would never alter. Without a second thought, he put it into words.

“I will always be. Whenever you need me.”

“You are very kind.”

‘Aye. Aren’t you just!’ the devil on his left shoulder grinned and, with a sudden huff, Darcy stood to poke again at the blameless fire and take some time to steel himself before returning to her side to diligently play the part of the detached kindly relation and coax her into talking of everything and nothing, to take her mind off her sister’s plight. 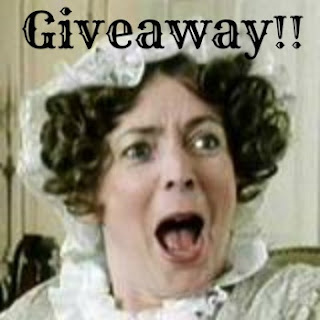 If you would like to find out how Jane’s baby came to be born in Mr. Darcy’s house and indeed where
on earth was Mr. Bingley,  please leave a comment to enter the giveaway of a Kindle copy, available internationally.

The giveaway ends on 24th Oct 15. Thanks for stopping by, best of luck in the giveaway and many thanks again, Tamara, for having me as your guest.

Thank you Joana! It was a pleasure to have you as always, The winner will be announced on the 26th Oct 15 along with a review of The Unthinkable Triangle.


You can connect with Joana Starnes on http://www.joanastarnes.co.uk ; http://www.facebook.com/joana.a.starnes ;
http://www.twitter.com/Joana_Starnes
or visit ‘The Unthinkable Triangle Facebook page’ for details of giveaways and lots of images that have inspired this story.
Posted by Unknown at 23:30